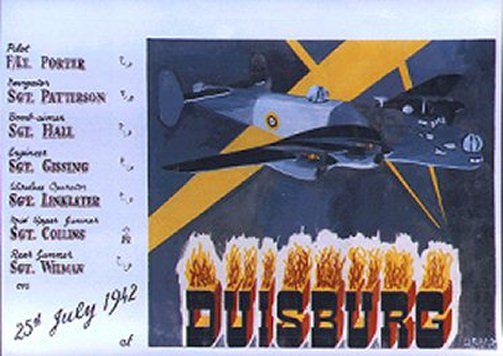 This painting was done by my Bomb Aimer, Sgt. Don Hall, while he was in Lamsdorf POW Camp.
He gave it to me at the R.A.F. ex-POW Reunion, September 1980 at Toronto, Canada.

And click here to link to the Stalag VIII-B discussion group site.

The following Poem was written by RALPH WILSON GILBERT, Mid-Upper Gunner to Allan Reynolds. It was published in 158 SQUADRON (RAF Bomber Command) ASSOCIATION Newsletter #5
I feel relieved and happy, the moon is on our beam,
Then suddenly the fighters are in among the stream,
Combats break out on every side, the criss-cross bullets fly,
I see four stricken bombers fall blazing from the sky.

As cannon shells come leaping, I watch the battle grow,
A Halifax to starboard attacks a one-one-o.
I see another aircraft about to meet its fate,
A fighter closes in on him - a JU 88.

This is no even contest, no warring of the Gods,
Our bullets can't match cannon shells, we know the desperate odds,
I nurse my four sleek Brownings, with their belts of 303,
And hold on to the 88, that's quietly shadowing me.

With twice our speed and half our size, we're lucky to survive,
The only thing that we can do is weave and twist and dive,
He takes a chancy pot-shot, his shells fall short astern,
He's a little bit too eager to see our aircraft burn.

I tell the skip to corkscrew, before we get the chop,
And as we're diving steeply, I watch the fighter drop.
He very nearly vanishes into the hazy air,
And then with startling suddenness, he fires a fighter flare.

Suspended on a parachute, it hangs above our tail,
Glowing with brilliant radiance, it makes the moon seem pale,
Crouched in my rear turret, well how am I to know,
That the cunning Hun is waiting a hundred feet below.

We have no under turret, no one can see below,
He sits there as we corkscrew, following as we go,
An upward firing cannon, close by the pilot's cheek,
Is beaded on my turret, its code name SCHRAGE MUSIK.

Where ignorance is bliss they say, 'tis folly to be wise,
Though soon I'll face the MUSIC in those unfriendly skies.
We have the flare behind us, suspended there on high,
I watch it fading slowly from the corner of my eye.

Once more the void is empty, all peaceful and unreal,
I call through on the intercom "Regain an even keel,
You can straighten up now skipper, we've lost him I believe,
But don't fly straight and level, maintain a gentle weave".

No sign of JU 88 - No ME one-one-o's,
Quite soon we'll be at the coast where the English Channel flows,
I sigh and breath in deeply, with ill disguised relief,
When streams of white hot tracer come hosing from beneath.

My world dissolves around me, I take a fearful blow,
My legs are ripped and shattered from the holocaust below,
My Browning guns have vanished, my chest is torn and red,
My perspex dome disintegrates - I AM ALREADY DEAD.

My brief sweet life is over, my eyes no longer see,
No summer walks - no Christmas Trees - no pretty girls for me,
I've got the chop, I've had it, my nightly ops are done,
Yet, in another hundred years, I'll still be twenty-one.

The following was sent to me by Anthony Skeet, and gives an addditional significant insight into the secondary lateral impact that this terrible period caused in the lives of those not directly involved in the ensuing conflict.

I was just a wee child, when the world went wild, with warbird, bomb and gun,
Not knowing then, whether or when, we might see the next rise of the sun,
It was much later I found, whilst seeking around, how I was "A Dead Airman's Son"
Who for pride in his Nation, and Honour and Station, of Bomber Command he was one,
To serve with tradition, his Lands finest Mission, and give up the right to his fun,
Life's pattern suspended, many lives and dreams ended, in the War that had to be won,

Casting ethics aside, High Command did decide, Bombing Cities would have to be done,
For such duties so tried, with convention denied, the "Whirlwind" was begun,
With purpose all bent, and honour all spent, his conscience was twisted and spun,
So he finished it all, yet his way, held no call, for his memory any to shun,

It is many years now, since I found out quite how, he made his stark final choice,
Still year upon year, I shed a small tear, and ponder the thoughts he might voice,

Whilst never quite known, he is ever my own, and I'm proud to be his "Airman's Son."

Michael Anthony Roy Skeet.
(If you have any comments about this piece or would like to contact me, please send me an e-mail at skeet@skeet.worldonline.co.uk)

Go Back to Chapter Headings